Fresh from Kickstarter, we've got a copy of Vast: The Crystal Caverns!

Play as the classic, daring Knight, the chaotic Goblin horde, the colossal, greedy Dragon, the scurrilous Thief, or even the Cave itself — powerful, brooding, and intent on crushing the living things that dare to disturb its gloomy depths. Each role has its own powers, pieces, and paths to victory … and there can only be one winner.

This asymmetric dungeon crawler from Leder Games was a big hit at GenCon this year, and we've got some first impressions from our initial playthrough. 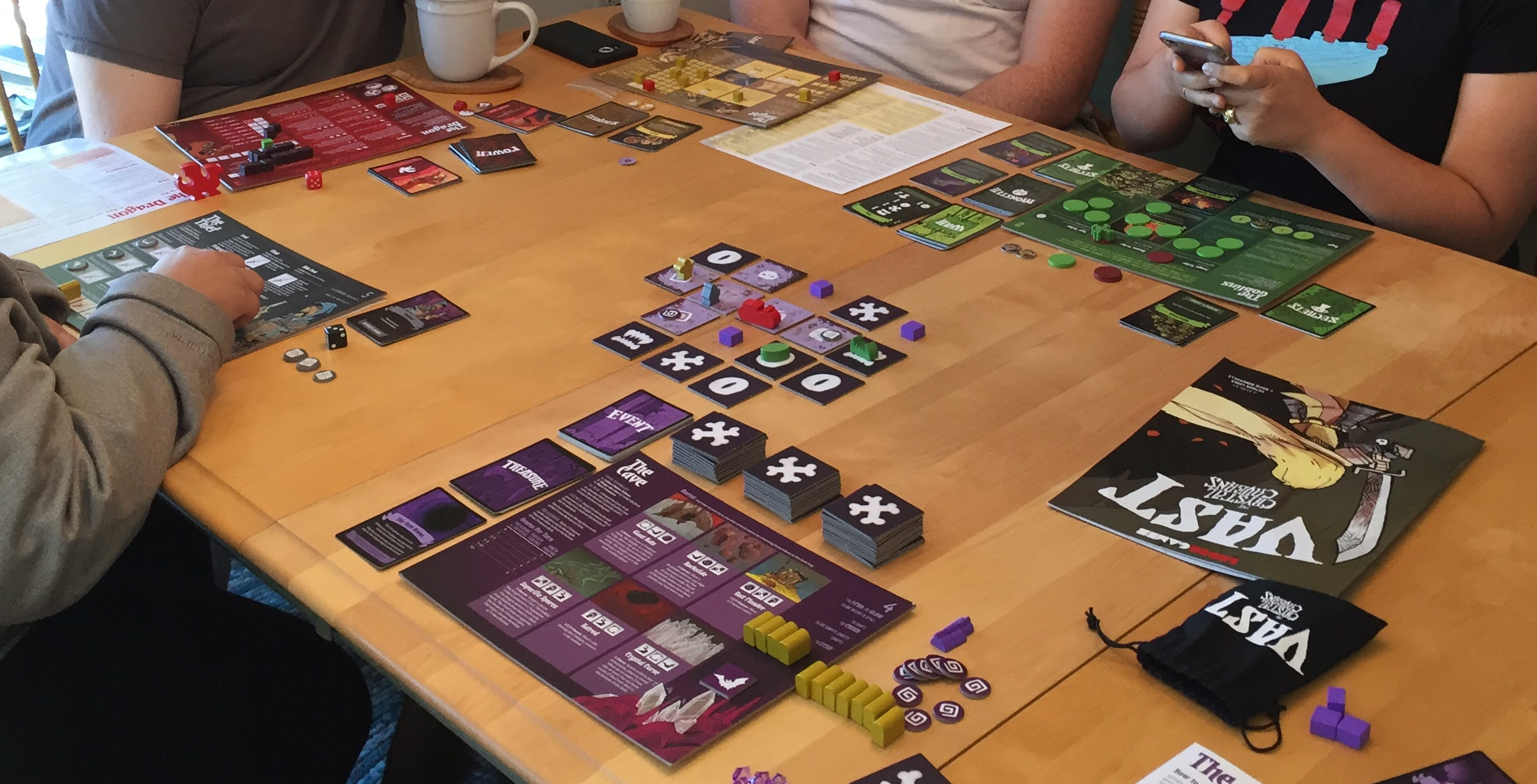 Vast pits five players with drastically different goals against one another in a cave that shifts and changes each time you play. If you don't have five players, that's okay; alternative win conditions are listed in case one or more roles aren't filled.

In their turn order, the roles are:

The Knight's goal is to slay the Dragon. Equipped with loads of bombs, a magical map, shield, and bow, the Knight is ready to deal with almost any scenario. When the Knight starts, she has two hero cubes she can allocate to move, encounter things, perceive hidden characters like the Thief, or use her treasures. As she gains grit from performing actions, she'll slowly unlock more cubes.

The Goblins are trying to kill the Knight. Split across three tribes that each get a single action per turn, the Goblins are unique in that their strength is directly proportional to their population and rage. These things ebb and flow as the goblins attack, are attacked, and move around the map. They like dark tiles (ones that haven't been flipped over/explored yet), and are weaker when exposed to light.

The Dragon is very, very sleepy and would like nothing more than to wake up and escape the cave. By collecting treasure, eating Goblins, and exploring rooms in the cave, the Dragon will slowly grow in power as he wakes up. Once he awakens, he becomes a rampaging engine of destruction (albeit one now hindered by walls) and must reach the cave's entrance to secure victory. His powers are semi-random as he draws a number of power cards each turn that can be combined to produce a variety of spells and effects.

The Cave player is responsible for building the map, resolving events and treasures for the Knight, and generally trying to be a pain in the butt to everyone else at the table. Since the Cave is sick and tired of all of the things running around inside of it, it begins to collapse once every tile has been placed on the map. If it can remove five crystal tiles from the map before someone else wins, the Cave achieves victory!

Each turn, the Cave gains a number of omen tokens based on the number of unclaimed treasures and revealed crystals on the map, which it can then use to alter the map, place more tiles & treasures, and hinder the other players.

The Thief is cursed to live forever, returning after each death until he can collect enough treasures to break the spell that grants him unlife. One of the most flexible roles, the Thief can reallocate his statistics to make himself more stealthy, strong, or agile. He also has a slew of upgradable abilities -- angry Dragon in your way? Backstab it and siphon away a bunch of cards! Walls blocking your path? Climb over them!

The downside to being the Thief is that you're essentially a walking treasure bag -- your loot level gives players who slay you all sorts of bonuses.

All in all, pretty good! We'll be adding Vast to our regular Game Night rotation!